Group Show: On the Basis of Art at the Yale Art Gallery

Opened to the public after a long postponement due to the pandemic, an exhibition celebrating 150th anniversary of the first woman enrolled at Yale is open on a limited basis at the Yale Art Gallery in New Haven, CT. The exhibition includes two works from the collection by Kereszi alongside those of almost 80 other alumnae.

From the museum’s website
“On the Basis of Art: 150 Years of Women at Yale showcases and celebrates the remarkable achievements of an impressive roster of women artists who have graduated from Yale University. Presented on the occasion of two major milestones—the 50th anniversary of coeducation at Yale College and the 150th anniversary of the first women students at the University, who came to study at the Yale School of the Fine Arts when it opened in 1869—the exhibition features works drawn entirely from the collection of the Yale University Art Gallery that span a variety of media, such as paintings, sculpture, drawings, prints, photography, and video. Beginning with Josephine Miles Lewis, the very first student, male or female, to be awarded a Bachelor of Fine Arts degree, in 1891, the show highlights the work of nearly 80 artist-graduates, including Emma Bacon, Certificate of Completion 1885; Audrey Flack, B.F.A. 1952; Eva Hesse, B.F.A. 1959; Sylvia Plimack Mangold, B.F.A. 1961; Jennifer Bartlett, B.F.A. 1964, M.F.A. 1965; Howardena Pindell, M.F.A. 1967; Roni Horn, M.F.A. 1978; Maya Lin, B.A. 1981, M.ARCH. 1986; An-My Lê, M.F.A. 1993; Rina Banerjee, M.F.A. 1995; Wangechi Mutu, M.F.A. 2000; Mickalene Thomas, M.F.A. 2002; Mary Reid Kelley, M.F.A. 2009; Njideka Akunyili Crosby, M.F.A. 2011; and many others. The title of the exhibition references the phrase used in the landmark 1972 U.S. federal law Title IX—which declared that no one could be discriminated against “on the basis of sex” in any education program receiving federal financial assistance, and which forced the School of Art to hire full-time female faculty beginning that year. Amid the rise of feminist movements—from women’s suffrage at the turn of the 20th century, to the ERA movement of the mid-20th century, to the #MeToo movement of today—this exhibition asserts the crucial role that women have played in pushing creative boundaries at Yale, and in the art world at large.”

Kereszi is included in the catalogue and in the boxed set of notecards created to accompany the exhibition.

The exhibition is free and open to the public, but in the Fall of 2021 with limited hours and access. The galleries are open to the public Fridays from 5-8 p.m., and 10 a.m. – 6 p.m. each weekend, and to Yale ID holders during the week. Reservations required. 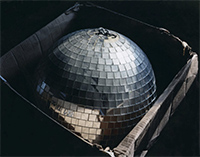