Looking back on her career path, Lisa Kereszi says, “I can trace a line where things clearly led from one thing to another.” But she could have never planned it, she says, explaining that chance—and people who believed in Kereszi and her work “at each turn”—played a big part in shaping her career, starting with her enrollment at Bard College in the early 1990s.
“A guidance counselor put [Bard] on my mom’s radar,” says Kereszi, who grew up working class and was first in her immediate family to attend college. She went to Bard intending to become a writer. “Little did I know that some of the top photographers in the country are teaching there,” she says. Stephen Shore, Larry Fink, Anne Turyn and others inspired her to pursue a career as a photographer.
After graduating in 1995, Kereszi moved to New York, hoping to find work as a photo studio assistant. She took a job at Lexington Labs to support herself, and for free darkroom access. Lexington Labs published Blind Spot magazine, where Queens Museum curator Hitomi Iwasaki started her career. Iwasaki realized Kereszi wasn’t destined for lab work, so she helped arrange a job interview for Kereszi at Nan Goldin’s studio. Kereszi went to work as a studio assistant for Goldin around 1997.
Kereszi hadn’t considered going to graduate school, but Goldin was traveling to New Haven once a week to serve on a Yale critique panel. Kereszi was intrigued. Dana Hoey, a Yale School of Art grad who came to work in Goldin’s studio, also talked up Yale to Kereszi. “I was hooked,” Kereszi says, “so I applied.”
Meanwhile, Kereszi had already gained a foothold in a New York gallery. Goldin’s studio manager at that time was Marina Berio, who is now chair of the general studies program at ICP. Kereszi recalls that Berio suggested she contact Joe Amrhein at Pierogi Gallery to show her portfolio. “Joe connected with my work,” and put some of it in his files, Kereszi says. Pierogi showed Kereszi’s work in a group show for the first time in 1998.
Pierogi continued to show Kereszi’s work after she earned her MFA at Yale in 2000. Kereszi had a good relationship with the gallery, but says, “My ambition and my goal was that I wanted to show at one of the top galleries in Manhattan.” She had several in her sights, including Yancey Richardson.
“I got on [Richardson’s] radar and I stayed there,” Kereszi says. First, she explains, a photo collector who was a client of Richardson’s saw Kereszi’s work at Pierogi Gallery, and wanted a particular print. Richardson ended up buying it on the collector’s behalf.
From that point, Kereszi periodically sent promotional postcards to Richardson, and stopped by the gallery to say hello. Around 2001 or 2002, Kereszi got a portfolio review with Richardson. “Honestly, I think it was because I was a graduate of Yale,” Kereszi says. “When you go through a program like that, it opens doors.” To Kereszi’s disappointment, though, Richardson didn’t call her back. “She needed to keep her eyes on me longer, and I needed to make more, better work.”
In 2004, Kereszi had a two-person show at the Urban Center Gallery and City Hall with Andrew Moore, who was represented by Yancey Richardson. The two-person show featured photographs of Governors Island, which the Public Art Fund commissioned Kereszi and Moore to document in 2003. Around that same time, Kereszi met David Hilliard, another photographer represented by Richardson, at the Yale School of Art. “I met him at a post-crit dinner when he was teaching there in the early 2000s,” Kereszi says. On Hilliard’s recommendation, Richardson included Kereszi in a 2004 summer group show that included works by Gregory Crewdson, Nadav Kander, Jerry Uelsmann and others.
“All those things conspired.” Kereszi says. “I had several years invested in getting [Richardson’s] attention, and then the universe just kind of came together.” After the summer group show, Richardson offered to represent Kereszi. She had her first solo show at Yancey Richardson Gallery in 2005.
Kereszi’s work is now in numerous museum collections, including the Metropolitan Museum of Art, the Whitney, the Getty Museum and others. Since 2004, she has taught at Yale, and is now director of Undergraduate Studies in Art and acting director of Undergraduate Studies in Photography.
Her advice to students is to say Yes to any reasonable opportunities present themselves. “You don’t know who you’re going to meet, you don’t know what you’re going to see that you could take a picture of. For me, it was so much of one thing leads to another.”
-David Walker 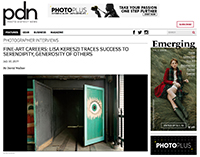