Photographer Lisa Kereszi patrols the trash-strewn border between camp and nostalgia with style to spare. Claire Mitchell follows in her footsteps.

“I’m definitely a little nostalgic, but then nostalgia is kind of a dirty word, too. There’s a fine line there. And I think I am staying on the better side of it,” says photographer Lisa Kereszi of the slippery edge between reminiscence and kitsch. It’s relatively easy to create an image in bad taste—what’s not so easy is revealing the intrinsic value in what could simply be deemed cheap garishness. Each of Kereszi’s photographs, whether they capture her grandmother’s pink rayon drapes flanked by a pictures of a smiling cherub, the flashing disco wall at her childhood roller rink, or two single beds pushed together in a cheap motel room, is a subplot in a bigger working-class American narrative.

Kereszi, who graduated form Bard College before going on to Yale University for an MFA, grew up in Media, Pennsylvania. Her tattooed biker father runs her grandparents’ junkyard, and her mother used to own an antique shop, so it seems that unearthing hidden gems is in her blood. “My grandmother claims that I have gypsy blood—there’s this kind of wanderer scavenger thing going on. I’ve always been fascinated by finding and searching—one man’s trash is another man’s treasure,” she says with a smile. Kereszi’s photographs are, in fact, full of the remnants of other people’s good times: Mardi Gras beads hanging from a New Orleans strip club window, popcorn scattered across a swirling movie theatre carpet. “I hate clean things. I’m interested i the trails and traces people leave behind,” Kereszi explains. “Sometimes a bit of trash or a crack or a stain tells me more about a person’s condition. I’m looking for the moment when that thing is transcendent.” That transcendence comes when the popcorn on the dirty blue theater floor takes on the look of an enchanting night sky, or when the feather-covered burlesque dancer becomes an angel just out of reach.

Kereszi’s photographs, some of which can be seen at the Whitney Museum of American Art’s Pictures From Within exhibit (in New York City through September 21), are all straight prints, meaning there’s no digital remastering of images or setting up of scenes. “It’s really important for me to have something real,” says Kereszi, who doesn’t like it when people accuse her of staging her pictures. “I love being out in the world. Finding those things is kind of like a treasure hunt for me.”

So far Kereszi’s hunt has taken her to the edges of suburban America and back again. “I shoot in Vegas, Miami, L.A., New York, Pennsylvania, Connecticut—just where I find myself. But I guess I am drawn to those places that are a little bit gritty.” Kereszi has followed a shadily evocative trail from her own childhood in kitschy suburban Philadelphia to seedy Las Vegas motels and dodgy Times Square strip clubs. “It’s strange,” she muses, “I always wanted to better myself, escape from a white trash class, and I guess I really have, but only by going back to it.” 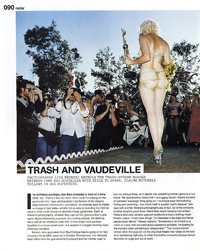