Photo District News’ 30: Our Choice of Emerging Photographers to Watch 2003

Growing up outside Philadelphia, Brooklyn-based photographer Lisa Kereszi split time between her father’s salvage yard and her mother’s antique shop. Though it wasn’t the typical blue-blooded upbringing one thinks of with eventual Yale graduates, her formative years instilled in Kereszi the value of what others discarded or forgot. This theme recurs in her photography, which often deals with the outdated and tacky tableau of bowling alleys, motel rooms and roller rinks. Starting with unpredictable angles and scenarios, Kereszi’s brilliantly saturated long-exposure photographs yield new understanding, infusing deeper meaning in the banal. While Kereszi’s photographs are well composed and pleasing to the eye, you won’t find her glossing up her subjects or catering to trends. Instead, she prefers to show the idiosyncrasies of Americana as is, all the while hinting at its deeper implications. When she set out to photograph a strip club, Kereszi made a picture about distance. By showing the club during the day, with its empty stage and upside-down chairs, she illustrates the disconnect between men and women without showing either of them. Though she aims to avoid nostalgia, Kereszi has a preservationist mentality and a need to point out things others may not notice. “I’m not about kitsch,” says Kereszi, who points out that all her photographs, even the ones done on assignment, are personal works. “It’s more about sealing something and making the things you photograph immortal.” 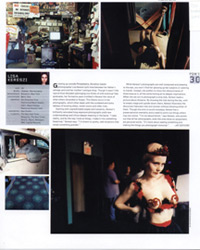