Lisa Kereszi is a visual kleptomaniac. As the old joke goes, she finds things before people lose them. She sifts through the detritus of ordinary places, like a junkyard office or a roller rink that’s seen better days, and pilfers the extraordinary. At Bard College, she started out as a writer but soon switched to photography, probably because she realized there was no need to make it up; it was all right there in front of her for the taking. For instance: you are coming out of a movie theater and you look down. The dirty blue diamond-patterned carpet flecked with popcorn-the sort of thing you see or avoid seeing a million times-is a night sky festooned with stars, and the Hall’s cough drop is a square, glowing planet. You take a picture. Or you walk into a South Beach club called Mynt, and true to its word, there’s a vast mint-green wall behind the DJ’s booth, the image on the cover. In the bottom half of the frame, just below the doubled symmetry of sound paraphernalia (two mikes, two turntables), is a vast upwelling blackness. Isn’t this what DJs really traffic in-the bright color of fantasy, the darkness of anonymity? “Lisa looks at things dead on,” says Yancey Richardson, whose Chelsea gallery is displaying recent work from March 22 to May 5. “She has an idiosyncratic eye for the details that everyone else misses.” Like William Eggleston, or her teacher at Bard, Stephen Shore, Kereszi lets things do the talking, in all their lurid colors. But there is none of Eggleston’s courtliness and reserve. In her avidity, she’s not afraid to let whole quadrants of her images go almost blank to get the one detail that rivets her. Adds Richardson, “Sometimes I have to just sit until I understand what made her take the picture.” The daughter of a junkyard owner and an antiques dealer, Kereszi is by her own admission a treasure hunter, seeking poignancy in bits of popcorn and longing in the night lights of Las Vegas. She never steals by breaking and entering but by going where people are themselves looking for something. She gravitates to strip clubs and arcades, where darkness fosters desire, and color and light give illusions permission. Her series on burlesque clubs recalls Susan Meiselas’s photo essay on carnival strippers, but where Meiselas went up close and political, Kereszi retreats into the darkness of the cheap seats, capturing the shadowy backgrounds that loom over and around her performers. Even in the hard light of day, with the tawdry spectacles unmasked, the locations retain traces of their allure. The blue doorway of a haunted house, which we can see is nothing but a chipboard set painted red with vaguely exotic designs, leads into a series of other doorways, which open out on an empty lot. So little is required for belief. Is this what she has come to steal, then, the last shred of the illusion that desire can transform ordinary reality? Just the opposite. Every doorway in her work is an invitation to mystery, and every worn out place or thing testifies to the power that dreams once held-and still hold-in people’s lives.

photograph is the bi-monthly USA guide to photo-based art with listings of exhibitions, private dealers, resources, and websites. There are also columns, a calendar of events, and illustrated advertising from galleries, museums, dealers, auctions houses and photographers. 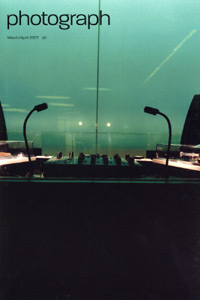