Lisa Kereszi, extolled by her undergraduate mentor Stephen Shore for the “visual poetry” of her high-key color photographs of bleak, empty rooms, has remained true to her vision of the tawdry as transcendent since her selection for the 30 issue in 2003.

“I’m still interested in places where people go to escape or have fantasies,” says Kereszi, whose 2007 solo show, “Cheap Thrills.” at Yancey Richardson Gallery in New York featured images of strip joints, movie theaters, haunted houses and night clubs. One can, however detect a subtle change creeping over Kereszi’s work—fewer saturated colors, more greens and browns, more outdoor imagery—that she believes may speak to the biggest change in her life and career in recent years. A year ago, she moved from New York to New Haven, where she has been teaching at Yale for the past four years. Kereszi is currently acting director of Yale’s undergraduate photography program, teaching half time in addition to administrative duties. “It helps make me more critical about what I’m doing, because I’m talking and thinking about photography all the time.” says Kereszi of the impact of teaching on her own art. That said, Kereszi confesses to being “anti-overtheorizing” and her own work is very empirically based. As such, her 2003 Public Art Fund of New York commission to photograph Governors Island gave her confidence that she could sustain a project focused on the sort of overlooked and unloved places that fascinate her, places that, in her own words, might best be described as “sad but beautiful.” In 2005, Kereszi’s sad but beautiful photographs won the $10,000 Baum Award for Emerging American Photographers from the University of California, Berkeley Art Museum, and Pacific Film Archive. They will also be the subjects of two forthcoming books.

This spring, the Italian publisher Damiani Editore will publish Kereszi’s Fantasies, a book comprising both images of empty strip joints and new burlesque performers. In the spring of 2009, Nazraeli Press will publish a Kereszi monograph. Says Kereszi: “My intention—what’s important to me, is to have been part of the dialogue of photography. It’s exciting to me that that ‘s starting to happen.” 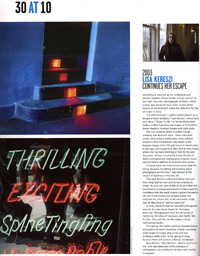