There is something profoundly sad about disco balls. Once a symbol of glamour and excess, the disco ball has been reduced to kitsch—a ridiculous, ersatz object that is laughably out-of-touch. Yet for all its tackiness, it retains something poetic. Disco balls, with their mirrored surfaces, confront us with our own mortality: a reminder that nothing—trends, parties, highs, boom times, relationships, life—lasts forever. These ephemera—dusty disco balls, derelict topless joints, and abandoned roadside ice cream stands—are lovingly captured in The Party’s Over, an exhibition of Lisa Kereszi’s recent photographs, running through July 6 at the Yancey Richardson Gallery in New York City. “Maybe it’s a mild depressiveness, but I find beauty in the left behind,” the 38-year-old Kereszi said at the show’s opening yesterday. “It’s sort of the way I see the world.” Kereszi, who grew up in suburban Philadelphia, has always found value in others’ junk or forgotten treasures. “My mom owned an antique shop; my dad owned an auto junkyard,” she explains. “So I’ve become a bit of a scavenger too.” Through her lens, the abandoned become transcendent—exemplified by her photos of New York’s Governor’s Island, a former military base that had been sealed up for almost a decade before it reopened as a summer playland—and the beloved, hollow and sad—as shown in her previous series of amusement park photographs taken in the light of day. The Party’s Over continues in this vein. Its images are contradictory: places and objects of joy and decadence that have been crushed by neglect, passing whims, or economic hardship. In one photograph, a disco ball with a couple dents sits in a cardboard box, waiting for storage. In another, a lone stripper pole stands against a red-painted wall with a dartboard. One of the show’s most comical images is of a discarded plastic shark floating in a lake. The scene—the placid water, the lush forest of trees—is almost idyllic, save for that tacky, solo shark. It’s heartbreaking. Yet the photographs aren’t all doom and gloom. Indeed, The Party’s Over has a softer palette than Kereszi’s previous works, which can emphasize the garish. “I look at these things with warmth and love,” says Kereszi. “It’s not cold or analytical.” She points to a photograph of a bay window looking out to an overgrown garden, the sunlight streaming in. “I think there’s hope; a portal to another place at the end of it.” 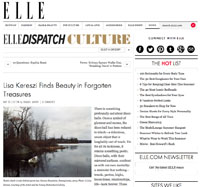