Lisa Kereszi has yet to publish a book of her photographs. but she has already gained the notice of editors and peers. Since earning her M.F.A. from the Yale University School of Art in 2000, the 34-year-old artist has taken a number of striking pictures characterized by color so intense it seems unreal, a signature style that nonetheless keeps faith with the tenets of realistic documentary.

Among her greatest hits so far are Bus Stop with Sea Spray and Water Fountain, both taken in 2003 on New York’s Governors Island. The first depicts a bus shelter at water’s edge. The opening of the transparent structure and the bench inside are oriented away from the viewer, facing the sea. Mottled light, a streetlamp, and the spume of a wave that has just breached the wall turn this ordinary, somehow irrational scene into one Magritte might have painted. The second image (the March 2006 ARTnews cover) is more typical of the artist’s work in its concentration on a single object. A stainless-steel drinking fountain is pictured against a wall in an institutional hallway, the silvery metal and coppery painted background reflecting the sun with an unnatural glow.

Kereszi likes to poke around the cultural fringe – burlesque joints, haunted houses, tawdry New York. (Her father was an outlaw biker while running the family junkyard business in Pennsylvania. The 2005 photograph Bicentennial Rug, Dad’s Room indicates that he also has outlaw taste in decor.) Her impressions of places are often concentrated into small units: the fragment of a neon sign, an erased message on a blackboard. She favors saturated hues, as in the wrinkled red carpet of Stripper Pole (2001). William Eggleston’s wayward investigations, as well as David Lynch’s Blue Velvet and Stanley Kubrick’s The Shining, have clearly directed her eye toward the kitschy and the uncanny. She is a color traditionalist who still shoots on film and makes color prints.

Kereszi attended Bard College, where she studied with Stephen Shore and earned a B.A, in 1995. She then moved to New York and worked as an assistant to Nan Goldin. She is currently acting director of undergraduate studies in photography at Yale. Her career has moved quickly. She received the Berkeley Art Museum and Pacific Film Archive’s 2005 Baum Award for Emerging American Photographers, has had shows in 2005 and 2007 at New York’s Yancey Richardson Gallery, and contributes to the New Yorker. Collections of her work are forthcoming from Damiani Press this spring and Nazraeli Press next year. These should show whether Kereszi can sustain a vision over the length of a book. She has already proved herself one of photography’s most promising sprinters.

Richard B. Woodward is an arts critic in New York. 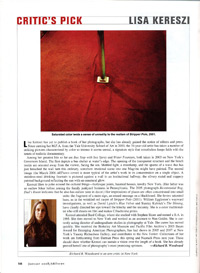