Lisa Kereszi makes medium-format color photographs that transform the mundane details of forlorn spaces—an empty ticket booth at a sex club in Times Square, an old blackboard in an abandoned school on Governors Island—into semi-abstract images of transcendent beauty. While the subjects are relics from another time, “they are not nostalgic,” says Stephen Shore. “Rather, they are shockingly immediate.”

Shore, who is widely celebrated as one of the pioneers of the color photography movement in the 1970s, singles out Kereszi as a young photographer worth watching. He was her teacher when she attended Bard College as an undergraduate in the early 1990s, and he has followed her work ever since, through her graduate work in the late 1990s at Yale—where she now teaches—to her solo exhibitions at Pierogi in Brooklyn in 2002 and 2003, at Yancey Richardson this past March, and her group exhibitions at the Brooklyn Museum, Museum of Modern Art, and Whitney Museum of American Art. “There is a certain pleasure in seeing a student of mine flourish,” he says. A painter must start with a raw canvas onto which illusion must be willed, but a photographer starts with illusionistic space as a give, then works against it if she wants to create works that acknowledge the two-dimensionality of the picture plane. Kereszi makes photographs that address illusion as one of their central subjects. “One aspect that interests me here is the way she plays with the picture plane; the way the content adheres to or drops behind the picture plane,” says Shore. Not surprisingly, her recent work evokes, consciously or not, a wide-array of 20th-century American painting in which the artist’s—from Edward Hopper to Cy Twombly and Mark Rothko—approach to the issues of pictorial illusion are seminal to the meaning of their work. Water Fountain, P.S. 26, Building 711, Governors Island (2003) is a frontal closeup of a metal water fountain on a bright orange wall. Viewed straight on, the wall appears to be pressed up flat against the picture plane, its light-drenched high-gloss surface echoing the gloss often associated with photographic paper. The incongruous presence of the fountain creates visual ambiguity. Set into a cavity in the wall, it has the effect of pushing the orange surface toward the picture plane. But the body of the fountain also extends out from the wall, which pushes the wall back, resulting in what Shore calls a “spatial twist.” “Your eye scans across the image and then at one point it pops off the picture plane,” he notes. The push-pull, combined with the atmospheric depth provided by the gloss, gives the work what he calls “its visual charge.”

Other photographs toy with spatial ambiguty and definition in different ways. In Ferris Wheel Mural, Broadway Arcade Times Square, NYC (2004), the ferris wheel is painted askew, setting it in relief from the painted horizontal bands of the seascape behind it, and pitching its front edge marvelously close to the viewer. The three-dimensional illusion is interrupted by the electric wall sockets on the two-dimensional wall on which the mural resides. On the right, a half-height white wall emerges from the mural and extends outward, its upper and lower edges aligning with the upper and lower right corners of the photograph. The wall forms a brace between the surface of the mural and that of the photograph, explicitly linking the two. “The other aspect, and perhaps the more significant, is the way the structure of Lisa’s images communicates the taste of the culture she’s observing,” says Shore. “I don’t see her work as a commentary on the culture she’s photographing, but as an observation. The intention of her work is more fragmentary and poetic than it is documentarian. She uses cultural observations as a resonant force in her visual poetry. “Exit Sign with Strings, Spook-a-Rama, Coney Island” (2004) depicts a double-exit door set in a nondescript wall, both of which are painted a battleship gray to ensure their invisibility in the dark. The image excludes everything you might expect in a Spook-a-Rama : there are no skeletons, ghosts, or ghouls.The only visible prop is a series of light-colored strings that hang from the ceiling, meant to be felt, not seen, by the visitors who would have walked through them. The strings and the back wall are parallel to the picture plane, and, separately, each would have mimicked the flatness of the photographic image, but together they establish a spacial ambiguity that is irreconcilable. “For me what stands out in Lisa’s work is the seamless integration of her formal inventiveness with her smart, sharp cultural sense,” says Shore. “The structure of an image is not just a visual nicety, but can inform some of the meaning of the work.”

Perhaps the ambiguity that she creates in her work reflects our own uncertainty toward her subjects, which are both present and lost in time. 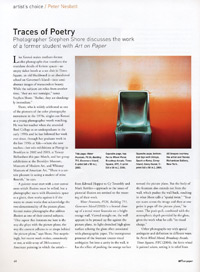