When Joe Kereszi Sr. opened Joe’s Junkyard in Trainer, Pennsylvania, in 1949, he had acquired a piece of the American dream: proprietorship. A second-generation immigrant to the United States, he tried for a career as a professional boxer, but after a string of defeats, he and his family opened and ran the business until its sale in 2003.

Photographer Lisa Kereszi took her first image of her grandfather’s shop in 1992 when she was 16. Years later, after attending graduate school at Yale, she realized she wanted to turn tales from the junkyard into a book. After graduation she moved to New York, which was closer to home, and started documenting the last days of her family’s business. Most of her images were taken between 2001 and 2003.

Her family’s story will be told in her upcoming book, “Joe’s Junk Yard,” set for release in September.

Having grown up around the junkyard, Kereszi initially felt too close to the subject, but she was able to separate herself and see that the business was failing because the family had made mistakes. Money hadn’t been invested back into the business, and many bills weren’t being paid, she said. They eventually sold the property to the sons of Joe’s brother, Lou.

“My family was bad at business,” she said, explaining that they didn’t change with the times and money had been squandered. They used outdated equipment instead of investing in more efficient methods, she said. “But there was also tragedy in my family.”

In 1973, Joe Sr.’s son, Rocco Kereszi, was fatally shot in what was later deemed a “justifiable homicide.” After police killed his son, Joe Sr., who passed away in the 1990s and left the business to his son and wife, began scrapbooking. He included seemingly random newspaper clippings, including the ones that marked his son’s death, and old photos on the same page. As Kereszi explored her grandfather’s memorabilia, she felt like she got to know him better. Many of his pages are included in her book.

The junkyard and its history influenced Kereszi. Growing up a small-business owner’s child, she never thought about working for someone else. Aesthetically, she prefers things a bit worn. In fact, her images are like the junkyard itself, something new made of something old.

“It made me who I am,” she said. “I hope it will make people understand where I’m coming from more.” 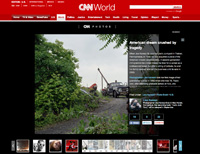