It’s not exactly the hush of le vieux Paris at the dawn of the last century. Yet somehow the large, garish color pictures taken last year among the modern ruins of Governors Island call to mind Eugène Atget’s documentary photographs of the streets, quays, hotels, storefronts, cars and fortifications of Paris before it was modernized. Why?

Is it the deserted lanes? The quiet quays? The signs of stilled commerce? The floors of old hotels? The worn-down fortifications? Hard to say. In these photographs the deserted lanes are bowling lanes, the stilled commerce is Burger King, the quays are home to Plexiglas bus shelters, and the ancient floors are the dirty, tamped-down blue-green carpets that once lay under a bed at a Super 8 Motel.

Governors Island, that ice-cream-cone-shaped island just a quarter of a mile from Manhattan, has been a weird place for a long time, a kind of military and penitentiary black hole. In 1637 the Dutch bought it from the Indians for two ax heads, a string of beads and a handful of nails. In 1710 Queen Anne quarantined plague victims there. In 1800 New York State ceded it to the United States; Confederate soldiers were imprisoned there during the Civil War. In 1901 the earth that was dug up for New York’s Lexington Avenue subway line was dumped there to build a seawall, nearly doubling the island’s size, to 172 acres. And now?

On April Fools’ Day 2002 the federal government, which has for the past 200 years used the island as a military compound, a prison and, most recently, a station and residential community for the Coast Guard, sold it to New York City for $1. (In 1996 the Coast Guard and all residents had to clear out.)

Soon Governors Island opens to the public, and the planning process for the island formally begins, overseen by the Governors Island Preservation and Education Corporation. But if you want to see how the island looked when the Coast Guard left it, there’s an exhibition of 29 photographs at the Municipal Art Society’s Urban Center Gallery in Manhattan, taken by two artists commissioned by the Public Art Fund. It isn’t a pretty sight.

What the photographers Lisa Kereszi and Andrew Moore discovered on Governors Island, or so it seems, is a modern-day Pompeii, an island abandoned in mid-Whopper. No joke. The one obvious area of overlap between their pictures is in fact Burger King. Mr. Moore photographed the fat orange word “Burger” and the orange and blue bench-and-table combos. Ms. Kereszi caught the bulbous blue letters of the word “King” in a sign sitting backward on the blue and tan floor.

The eight pictures that Mr. Moore took with a large-format camera are generally cheerier and grander. A photo of an abandoned bowling alley shows yellow, blue, orange and red balls on the loose in the lanes. Mr. Moore also seems fond of invidious pairings. A photograph of a sun-filled room in the Block House, the officers’ quarters where Ulysses S. Grant stayed in the spring of 1852, shows a framed portrait of Alexander Hamilton sidelined on the floor. Pride of place in this room belongs to a weight-lifting bench.

A photograph of Castle Williams, the 18th-century fortress on the island where Walt Disney was imprisoned when he went AWOL during World War I, shows the dowdy round fortress cheek by jowl with a hideous mid-20th-century brick and cement apartment building for bachelors. Pick your prison.

Mr. Moore’s most sardonic picture shows a mural commemorating the War of 1812. Soldiers are shown leaping off a cliff. What is wonderful about the photograph is that by some act of careless bathroom planning and careful camera work, the soldiers in the mural on the wall just outside the bathroom appear to be running along the top of the bathroom’s door frame and leaping in the direction of toilets.

By contrast, Ms. Kereszi revels in the plain and awful surfaces she found. Her photograph of the carpet of a Super 8 motel room, highlighting the differences in color and texture between the old, trampled part and the part that was preserved under a bed, is about as depressing as anything could be.

A picture of a messily erased chalkboard in Public School 26, building 711, which looks like a Cy Twombly blackboard painting, shows the name “Mrs. La Luz” chalked all over it, as if the teacher had gone crazy or a student had fallen in love with her just before the last class on the island. The white shelf of a narcotics closet is empty. All that is left is a thin blue line in Magic Marker separating the narcotics from who knows what.

Ms. Kereszi has an eye for the kind of detail that makes you feel like slitting your throat. One photograph shows an old office phone with a label that warns: “Do not discuss classified information. This telephone is subject to monitoring at all times.” The rounded steps descending to a deserted, darkened movie theater are illuminated by pathetic squares of orange-pink light. A photograph of a stainless steel water fountain makes it look blue against an orange wall. A lonely bus stop at water’s edge is protected from the gorgeous view by a sheet of Plexiglas. Her 21 pictures are sad and pointed.

Why the comparison with Atget, that cool cataloger of pre-modern Paris? Although both photographers take a more artsy and interpretive approach to Governors Island than Atget ever did with his photographic documents, both seem to be aiming for his effect.

Mr. Moore, with his telling juxtapositions, makes a kind of architectural vanitas, as if to say that yesterday’s prison is today’s castle and today’s bowling alley is tomorrow’s ruin. Ms. Kereszi gets closer to Atget by creating a kind of mini-catalog of the plain things of modern life, taking stock of the dirt today before it turns to dust tomorrow. 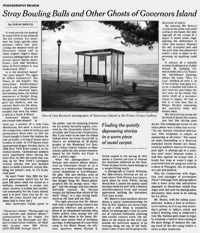