Philly-born Yale grad Lisa Kereszi shoots stunning, dark, heartbreaking pictures that offer a glimpse of faded beauty and lost love. With a body of work that ranges from Parisian strip clubs to wax dolls, Kereszi takes the helm as King of Photo.

What is your job?

LK: I am an artist, but I don’t mix media. I believe in photography. There’s a quote that I think of all the time from Garry Winogrand, who was a photographer of people on the street. He said something like, “There’s nothing as beautiful as a fact clearly described.”

What kind of stuff are you shooting?

What got you involved in photo?

LK: (As an undergraduate) at Bard… I made my pictures very obviously about something or some person. At Yale, I already knew about Andreas Gursky and Gregory Crewdson and other contemporary people, but I wasn’t really influenced that much by them until grad school. When Stephen Shore visited Yale, he said that my work had become “more photographic.” That it seemed like I was dealing with the same basic issues as before, but more photo-driven than subject-driven—if that makes sense. So now I strive to be more subtle, showing a place that a person has inhabited and showing the marks they leave behind: either bits of dust and dirt and scratches or the way someone decorates something. How that says something about their state of mind. And how you create this interior decor that’s sort of like a fantasy in certain places, like strip clubs or motels or even in a home, where, after some time, it doesn’t change and it becomes sort of nostalgic and degraded.

Why do you take the pictures of what you do?

LK: Some of my aesthetic, the decayed decadence and the theme of failed fantasy, comes form my biker dad who runs a junkyard that my grandmother owns. So I grew up near the junkyard, and my mom, for a while, had a little antique store, and would drag us around to yard sales. So my stuff is all about cast-off junk, the whole “One man’s trash is another man’s treasure” thing. I always feel like I am searching for treasure. What’s weird is that my last name is Hungarian, and (I’ve been told) part of that word kereszi means “One who is searching for.” And, supposedly I am related to gypsies.

It’s all in the blood lines!

LK: And my mom used to say she was Pennsylvania Dutch (German, really, not Amish, it turns out), so I thought that these two things create this battle in me. I can be really focused, efficient, matter-of-fact and afraid to take risks. And the other part of me is just totally ramshackle. 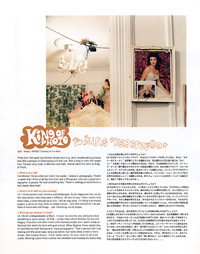