Joe’s Junk Yard is a personal narrative photo book, spanning more than fifty years and three generations, that explores one family’s achievement and subsequent demise of the American Dream. Kereszi’s grandfather, a first-generation American and boxer-turned-junkman, built an empire of used cars and scrap metal during the 1950’s boom times, only to be slowly, but consistently, foiled by a series of events, some outside of his control. Kereszi’s disquieting, loving photographs of the last decade of the business, along with historic ephemera and scrapbook photographs, tell the story of this family and its struggles with a changing economy, urban decline, family feuds, tragic and untimely deaths, and the challenges of an independent, family-run business. The family and the junk yard also represent larger themes that exist in our culture and economy today.

Watch the documentary film, A Steady Grind, that focuses on Joe’s wife, Eloyse, directed by Victoria Kereszi and Executive Produced by Lisa Kereszi, 2009 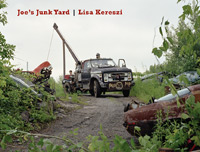