For more information, see the National Endowment for Humanities

From the home museum’s website “…the first major exhibition to use visual art as a lens to explore the lure that Coney Island exerted on American culture over a period of 150 years. An extraordinary array of artists viewed Coney Island as a microcosm of the American experience, from its beginnings as a watering hole for the wealthy, through its transformation into an entertainment mecca for the masses, to the closing of Astroland Amusement Park following decades of urban decline.” 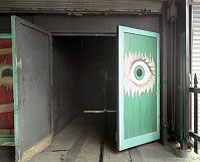